Emerald Ash Borer (Agrilus plannipenis or EAB) is an invasive insect species originally native to eastern Asia discovered in North America in 2002. Since its introduction, EAB has decimated North America’s native ash tree population, responsible for placing all three of New York’s ash species in serious decline. The loss of ash has had significant ecological and economic consequences. Ash wood was the primary wood used for baseball bats, ash was one of the most common trees planted in parks and on city streets (cities now must either cut and remove thousands of dead trees, or use pesticides to keep them alive), and the tree is important for several wildlife species.

Monroe County is home to some of the highest density of ash trees in the state, meaning loss of ash trees here has had a disproportionate impact on our parks, our forests, and along our waterways. Ash frequently grows along streams, swamps, and lakes, and is key to reducing nutrient runoff and sediment erosion – both of which are known to contribute to harmful algal blooms, and water quality decline.

The District, in conjunction with Monroe County and NYS Parks, and funded through the Great Lakes Restoration Initiative, planted 21, 240 new trees of different species along waterways in the county where ash typically grew. It is hoped that these new plantings will provide the same benefits to water quality that ash once did, and we can secure the economic and ecological health of our water through the future. 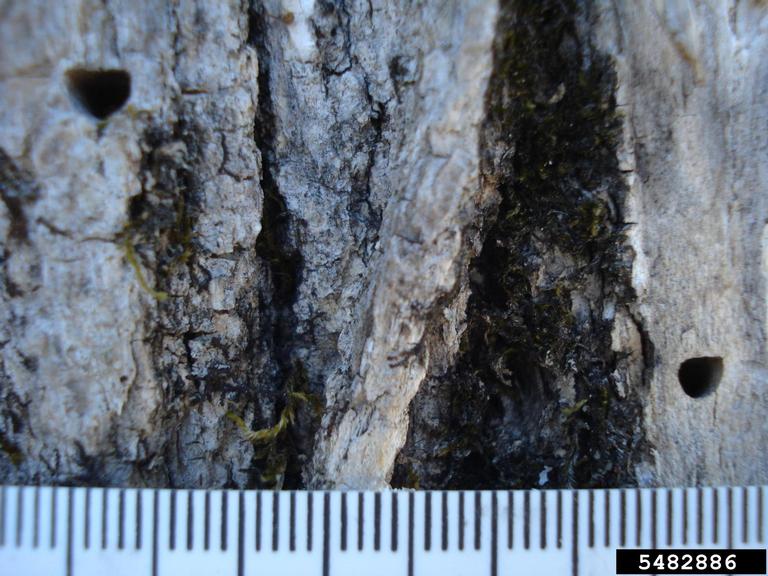 The exit holes of EAB in Ash bark. This is where the insect adult emerges after feeding on the inside of the tree.